Plans have been agreed for a £270m revamp Swindon’s North Star site by developer SevenCapital which should be complete by 2021.

Under the scheme, the Oasis Leisure Centre and a one million square foot area of land will be transformed into an ambitious leisure hub which will include an indoor ski centre featuring real snow. The new look Oasis centre will also boast an IMAX cinema, bowling alley, trampoline park as well as a hotel complex and mix of bars and restaurants.

The latest news signals a welcome move forward with plans to revamp the area which stalled after the original company set to develop the site, Moirai Capital Investments, ran into financial difficulties.

Over the coming months, SevenCapital will be working on submitting a planning application for the scheme, which is expected to take six to nine months to complete. 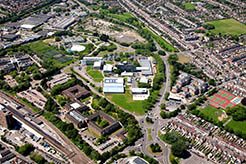 A aerial view of the North Star site

SevenCapital Director John Watkins explained: “Moirai has no future role in this project. We have re-financed all of Moirai's financial responsibilities."

Introducing the new plans, Mr Watkins said: "This is a long-awaited development for the people of Swindon and a very exciting project for Seven Capital.

"Not only will it bring a host of new leisure activities and brands for restaurants to enjoy, it will also help to attract many more visitors to the area. In recent years, Swindon has become increasingly popular with London commuters. The arrival of a multi-million pound leisure scheme will only serve to build on this and cement the town’s position as a real hotspot.

“At SevenCapital we have a strong track record of delivering large-scale complex regeneration projects and we are looking forward to applying our expertise to being Swindon’s North Star to life.”

He added that he was confident that despite there being other significant leisure offerings in the town, notably two other trampoline parks, there was a market to ensure that the revamped centre would be a commercial success.

The development, slated to be complete within four years, would be largely carried out by national firms but Mr Watkins said that local employment prospects could well be boosted by those forms making use of local contractors; and that once complete, the centre would provide a significant boost to the local economy.

Cllr Garry Perkins, the council’s Cabinet Member for Regeneration said: “This is a landmark development for Swindon and a real statement of our economic ambitions for the town. The regeneration of North Star is one of the council’s key pledges and I am delighted we have teamed up with one of the country’s leading property investment companies in SevenCapital to deliver what will ultimately be the UK’s largest leisure destination, when one includes the Oasis Leisure Centre.

“More than a quarter of a billion pounds will be invested in the site, which will give a huge boost to our local economy, not to mention the hundreds of jobs the scheme will bring, as well as greatly enhanced leisure opportunities that will continue to make Swindon a great place to live and work.

“I look forward to seeing the plans being submitted before the end of the year so we can push forward on one of the most exciting projects the town has ever seen.”

A campaign group is calling for ...