In October 2019, 63 people were arrested following the intensification week targeting drug lines and gangs in the town.

The following people have been jailed/sentenced at Swindon Crown Court:

Saeedul Ali (19) from Beckhampton Street, Swindon, pleaded guilty to three counts of supplying crack cocaine and two counts of supplying heroin and was given three years and four months in prison plus a six months suspended sentence for dangerous driving.

Detective Inspector Paul Franklin, who lead Op Jetway, said: “We arrested a total of 63 people during our week-long campaign which not only shows the amount of drug gang activity going on in the county but also the concerted effort being made by Wiltshire Police to close these lines down.
"Numerous dealers, including those sentenced today, involved in County Lines have appeared before the courts subsequently and a number have been jailed.
"This is a positive outcome for the many officers involved in the intensification week and the daily work they undertake to tackle the criminals who deal drugs and commit associated crimes in Swindon and Wiltshire.
"The aim of Op Jetway was to not only target the drug gang leaders, but also provide help for vulnerable people who often get caught up in drug dealing - protecting them and hopefully, with help from our partners, preventing them from falling back into this way of life.
"Our work is as much about protection and prevention as it is enforcement; working with the likes of local councils, schools and colleges, we can ensure that everyone is helping to tackle County Lines."

Wiltshire and Swindon's Police and Crime Commissioner, Angus Macpherson, said: "It's good to see some long sentences here; Op Jetway was the culmination of weeks of planning and intelligence and it shows the dedication of our officers and staff to crack these destructive County Lines.
"It's not just about enforcement, it has to be a multi-agency response in order to best reach those who really need our help.
"Education is also key and the police and my office are working with colleagues in the local authorities, schools and safeguarding to provide information and highlight the dangers.
"However, everyone needs to help; by people using their eyes and ears, they too can help police stamp on these criminal gangs.
"I encourage everyone to make themselves aware of the signs to look out for to help stop these criminals from exploiting our young and vulnerable people.
"Please keep calling 101 or 999, if an emergency, or reporting via the police website or Crimestoppers on 0800 555 111." 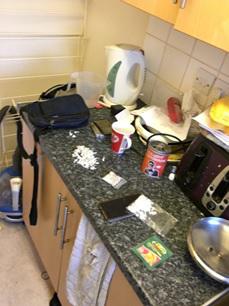