The obscure artistic gems of West Swindon - how many have you spotted?

They stand like above-ground archaeology, obvious yet unexplained, brooding in the landscape and surprising to the passer-by.

Yet in this largely forgotten state, the art works add a certain mystery to the community.

Swindon has dozens of public sculptures dotted around the town, mainly commissioned by Thamesdown Borough Council in the late 1980s and early 1990s and paid for by developer contributions to the Percent-for-Art public realm scheme, with some more recent works.
They are an important and unique feature of the town’s cultural make-up and should be recognised. This map concentrates on the artworks to be found (and lost) in West Swindon. 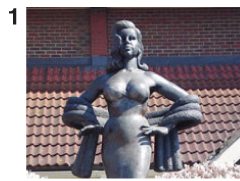 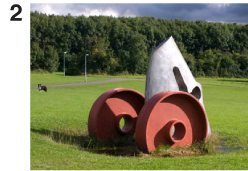 How The Mighty Fall, 1989, by Tim Sandys-Renton. This powerful sculpture in aluminium and cast iron surrounded by a large green space overlooking Ramleaze is a thought provoking comment on the industrial age 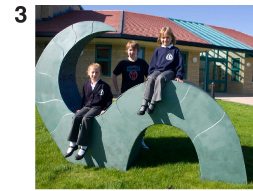 Bringing schools together, 2007, by Gordon Dickinson, created to mark the amalgamation of Salt Way and Shaw Ridge Primary Schools. Originally painted red, it is now green to match the building’s exterior colour scheme. 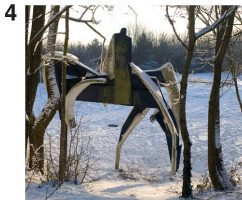 White Horse Pacified, 1987, by Julie Livesey. This imposing abstract concrete and metal structure, situated in the bowl of a former quarry opposite the junction between Worlidge Drive and Cartwright Drive, is an interpretation of the famous chalk white horses found across Wiltshire. 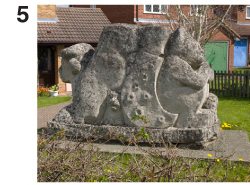 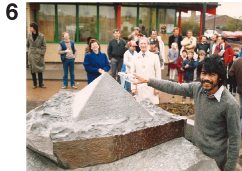 Nexus, 1986, by Hideo Furuta (1949 - 2007). The Japanese sculptor spent six months on site at Freshbrook Village Centre hand carving huge blocks of blue pennant stone - the same as used at Stonehenge - into three interlocking segments which are mounted on old railway sleepers. They are a massive presence within a busy urban setting. The picture shows Hideo toasting his work at the unveiling in 1986. 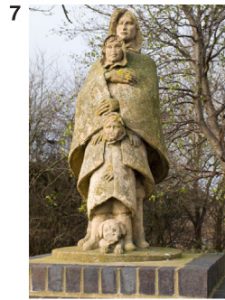 The Watchers, 1982, by Carleton Attwood (1908 to 1985) at Toothill Village Centre. The first sculpture in West Swindon, cast in ferro-concrete at Swindon’s town hall studios, is one of Carleton’s last works and due to his ill-health was largely completed by sculptor Pat Elmore. The work represents the guardians of the new community. 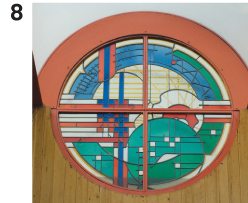 Toothill Sunrise, 1985, by Keith Gale. Whilst at The Watchers look into the barrel roof of Toothill Community Centre to see a stained glass window unveiled when the building opened. It depicts the new urban development set in Wiltshire countryside, with references to Swindon’s railway heritage and the high-tech future of the town. 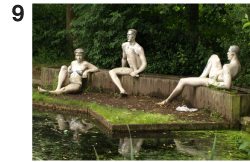 Looking to the Future, 1985, by Jon Buck. Three haunting fibreglass figures in bathing suits rest by the ponds at West Swindon Centre. Jon Buck was the first artist in residence in West Swindon and created the figures in a temporary workshop in Toothill. They were initially located in Westlea Park but were relocated due to vandalism.

The Great Western Hospital in Swindon ...

The risk of further devastating wildfires ...